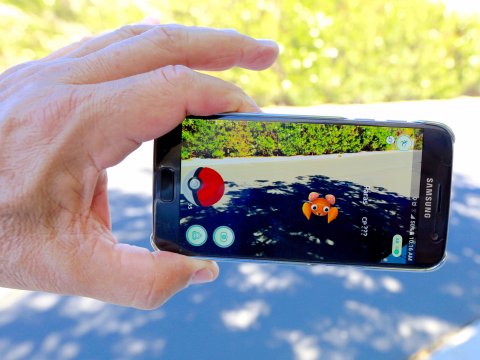 Bank Investment Consultant: All it took was Pokémon

The instant popularity of Pokemon Go has taught banks important lessons about engaging customers, rewarding them and getting them in branches.

Much like Uber taught the payments industry that the best way to get consumers to spend through their smartphones is to make the process invisible, the smartphone game Pokemon Go keeps players coming back to local landmarks without nudging them to a specific place or even promising them a specific reward.

“Neither the technologies nor commerce took center stage. Instead developers focused on creating an experience that would bridge the physical and online world in order to grip the imagination of its participants,” said Michelle Evans, digital consumer manager at Euromonitor International.

The augmented-reality mobile game, which launched last week in the U.S., Australia and New Zealand, is like a real-world treasure hunt on a smartphone — a treasure hunt for Pokemon. The GPS and camera provide a map and a window into a fantasy world in which real-world monuments become Pokestops, or locations where Pokemon (and Pokemon-catching supplies) are likely to appear if users visit them in real life.

Already the app is driving virtual Pokemon hunters of all ages out into the streets — and right to the doors of retailers and bank branches that didn’t know they were secretly hiding these beloved mythical creatures.

“The rapid adoption of Pokemon Go shows how quickly consumers can start using a mobile-specific experience,” said Fazir Ali, mobile strategy and innovation leader at Key Bank. “The lesson for us here is that we need to continue to create mobile banking services that are easy to use and add value either by providing insight or rewards.”

Banks are no doubt hard at work doing just that. In the meantime, a number of institutions are also trying to figure out ways to capitalize on the Pokemon craze.

In Florida, the marketing team at Davenport-based CenterState Banks arranged to have “lures” placed in branches in Jacksonville and Lakeland. Lures attract Pokemon characters, which in turn attract players.

In Edmond, Okla., Citizens Bank of Edmond is setting itself up as a rest stop offering with free bottles of water and a give-away contest designed specially for players.

CenterState figured it would take some time for the lures to pay off in the form of gamer traffic, but 20 people stopped by in the first hour, said Chris Nichols, the company’s chief strategy officer.

“That blew our minds,” Nichols said. “No other marketing channel we have has that kind of power.”

Of course, luring Pokemon players into the branch was one thing — turning them into customers is an altogether different challenge. Nichols said some on his team expressed reservations about investing time and effort in such a “soft marketing” gambit.

“One thing we struggle with was did we want to spend a lot of time on an endeavor that does not result in new checking accounts or sell loans,” Nichols said.

As he saw it, if nothing else, engaging with the growing Pokemon crowd promotes awareness of the CenterState brand and creates an “entry point” in the lives of millennials, who rank among the game’s most enthusiastic players.

Pokemon Go is actually a relaunch of an earlier smartphone game called Ingress, which experimented with the idea that retailers could pay for sponsorships within the app that would drive players to visit a specific store. So far, Pokemon Go has not opened itself to paid sponsorships, but the game’s developer is reportedly considering the possibility.

Banks and retailers long struggled to use mobile apps to drive traffic. Many are experimenting with geolocation and Bluetooth beacons, which can sense when a customer is near and provide targeted offers and other rewards. Ultimately these efforts can include payments as well, but few can claim to have motivated consumers to visit their branches the same way Pokemon Go — an app that is reportedly on more phones than the dating app Tinder — has energized its audience in a few short days.

“The hyper engagement and addictiveness of the game is the sense of accomplishing a task and getting to the next level,” much like the objective of mobile payments and banking developers, Ali said. “I think a similar type of emotional connection could be applied to mobile payments.”

Although in terms of mobile payment apps more broadly, getting to the next level would require some incentive for the customer to stay engaged and keep the user experience fresh.

Incidentally, “Pokemon Go” has been raking in $1.6 million daily just from iOS users in the U.S., according to data from SensorTower, a mobile app analytics platform. Compare that to the 5% of mobile users worldwide who make in-app purchases. Their spending comes to about $9.60 per app, per month, according to mobile attribution and marketing analytics platform AppsFlyer.

Brand loyalty is a significant factor too, and it’s another kind of emotional connection. The game hits a very large user demographic. Its youngest generation is helping spread the game virally (parents are playing too, with or without them). There’s also the 20-to-30-year-old group that grew up with Pokemon and now have the buying power to enjoy it on a different platform, said Jordan Edelson, founder and CEO of Appetizer Mobile.

People are more prone to make in-app purchases in Pokemon Go because they trust the brand, grew up with it, believe in it and want to interact with it using a different medium than they did in the past, he said. And now, they can be less discretionary, if they like, with their income.

“These are mobile payments that people are willing to spend and it doesn’t matter what method it is, as long as they can get that reward or that incentive and buy into brands that are familiar and they trust,” Edelson said.

Ali also said that while this won’t change consumer behavior overnight, financial institutions need to understand how brands like Pokemon outside of their daily financial services — on social media platforms, for example — help shape their expectations for their digital payments and banking platforms.

But it’s the gaming aspect of it that keeps users engaging with the app for longer periods, compared with an app a customer might download to send a couple of payments over, but not really come back to otherwise.

“It’s another page in the chapter of invisible payments,” said Deborah Baxley, partner at PayGility Advisors, who says Pokemon Go’s business model is “similar to in-app payments like with Uber, so that gamers can seamlessly purchase powers, toys and accessories.”

Read the entire article at: http://www.bankinvestmentconsultant.com/news/all-it-took-was-pokemon-to-get-people-into-bank-branches