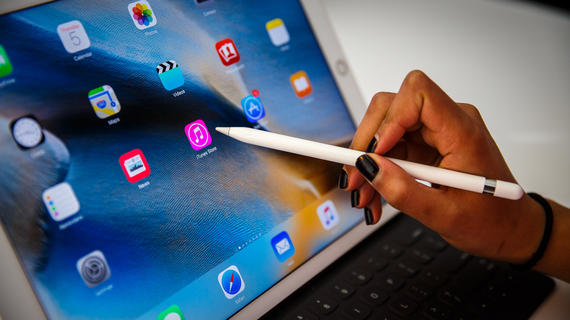 So many Apple devices now! What’s an app maker to do?

In the old days, developers only had to make apps for the iPhone and the Mac. The situation is trickier these days with multiple versions of software and devices, including the new iPad Pro.

Apple’s iPad Pro sports a 12.9-inch screen and works with an optional stylus and keyboard that doubles as a cover. Josh Miller/CNET

Apple, known for keeping its products simple and elegant, may be getting away from the simple part, at least when it comes to developers.

It wasn’t so long ago that Apple co-founder Steve Jobs liked to point out Google’s Android “fragmentation” problem, with developers forced to make multiple versions of their apps to support the varying Android devices. It turns out Apple may have a fragmentation problem of its own, thanks to a product lineup that’s a lot more complicated these days.

Along with three iPhone screen sizes and features specific to each generation of its iconic smartphone, Apple now offers different size tablets, a smartwatch with its own software, a streaming-media player that supports apps, and nearly a dozen Macintosh computer models. Starting this week, the Cupertino, California-based company adds a third tablet size with the 12.9-inch iPad Pro, which offers an optional stylus and a detachable keyboard. The lineup is a big change from the days of Jobs when Apple offered a much more streamlined group of devices and stuck with a standard iPhone screen size for the first five generations of the smartphone.

The new multitude of products — as well as the four different software systems running them: iOS for iPhones and iPads, Mac OS X for desktop and laptop computers, tvOS for Apple TV and watchOS for the Apple Watch — forces developers to pick and choose which apps to create first. The iPhone, which makes up about two-thirds of Apple’s sales, captures the most developer attention. But the increasing fragmentation of products and platforms means you may not find your favorite app on the new iPad Pro or the Apple Watch, or at least not a version of the app that can fully take advantage of the gadget’s unique capabilities.

If it sounds familiar, it’s a problem Google has dealt with since the early days of Android. Device makers released phones and tablets in myriad screen sizes, and developers weren’t sure which version of the operating system to build apps for. That led to early growing pains for products such as Android-powered tablets. Fragmentation continues to be an issue. Only a quarter of Android devices run the year-old release of the software called Lollipop. But Google has worked to mitigate the issue by pushing for apps that work well across the various versions of Android.

This is a dilemma that Apple is just starting to face. As CNET’s Scott Stein noted in his iPad Pro review, “At launch, very few apps are currently optimized to take advantage of the iPad Pro’s full potential.” The Apple Watch faces the same issue. Of the 13,000 Apple Watch apps available at the end of October, only 10 percent use watchOS 2, which lets apps run directly on the smartwatch instead of working as limited, iPhone-app extensions. The low percentage persists even though developers have had access to the newer smartwatch software since June.

Apple declined to say how many iPad Pro apps will initially be available for the device. The company has 850,000 tablet apps available in its App Store today.

Apple has “just had so many great things come out at once or over the past couple months that we have to prioritize what will hit the majority of our user base and nail those cases,” said Jamie Hull, vice president of mobile product at note-taking app Evernote.

Evernote delayed making an updated Apple Watch app based on watchOS 2 in favor of building an iPad Pro app and adding support for the new stylus called Apple Pencil for the first day they hit consumers’ hands. The iPad Pro is priced starting at $799, while the Apple Pencil costs $99 and Apple’s Smart Keyboard retails for $169. The products went on sale Wednesday on Apple’s website and will hit shelves at Apple stores, authorized retailers and some wireless carriers in more than 40 countries later this week.

Apple has tried to shore up the number of apps available for its new products by giving developers early access to its devices. It has also released software long before devices launch to give developers time to tinker. For instance, Apple gave developers access to watchOS in November 2014, five months before the smartwatch hit the market. For the iPad Pro, software companies including Adobe Systems, Autodesk and Microsoft got time to play with the tablet before it became available to the broader market.

For startups with limited resources or less access to Apple’s newest devices, though, it’s far more complicated to develop for Apple products than it was just a few years ago. And not many developers have the knowledge to take advantage of every new aspect of every new Apple product, like the 3D Touch feature on the iPhone 6S, said Orta Therox, head of mobile development for startup Artsy, which helps people buy and sell fine art.

“You can’t do it alone at a level of quality that people accept with these apps,” Therox said.

“It will be more of a niche development request or niche applications…likely stemming from the enterprise,” he said. “I don’t think the average consumer app or startup is going to go straight into iPad Pro.”

As Apple’s newest devices and features gain more traction with users, more developers will create apps for them. If you’re still looking for the biggest selection, though, you’d better stick with the iPhone.

For developers, “some of the products, like the Apple Watch and even Apple TV, right now are worth trying,” said Maximo Cavazzani, CEO of Etermax, creator of popular game Trivia Crack. “But, of course, it’s always something small compared to the iPhone. Our main priority is the iPhone.”

View the entire article at: http://www.cnet.com/news/apples-many-new-devices-may-make-life-difficult-for-developers/