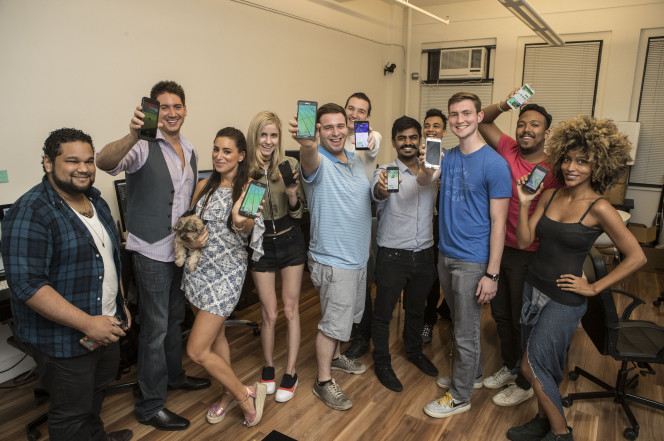 “If a Pokémon appears on your phone, anyone else in your area will see it as well,” Disla explains. “If [you] want it, then it’ll just take a minute to take out your phone. You try to catch it. Everyone tries to help.”

Pokémon Go — the smartphone game that has smashed app records with more than 30 million downloads worldwide since its July 6 debut — has become an office staple in the past two weeks. And rather than put a ban on the game, in which users try to catch as many Pokémon as possible, some companies are instead choosing to embrace it.

“I’m OK with it in our office if people are going to analyze it,” says Jordan Edelson, Appetizer Mobile founder and CEO. He’s encouraged his employees — who build apps for a living — to play the game and learn what makes it so popular.

“Employers can reasonably assume that, outside of lunch and rest breaks and the occasional text or email for personal business, employees should be focused on work.” says David Barron, labor and employment attorney

Pokémon Go was even the star of the company’s most recent twice-monthly after-party, where employees drink beers and play games. Employees caught Pikachus and Bulbasaurs while theorizing on why the app designers made certain decisions or if there are any changes they’d want to see.

“It’s a two-parter,” notes Disla. “It’s great for morale, and we literally learn a lot from the game because we [get to] know how an app is constructed.”

While this may seem like a gamer’s dream, the reality is that most companies are struggling to get employees to disconnect from Pokémon Go and other popular apps while they’re on the clock.

“Like any cultural trend, there will be employees who are addicted [to the game] or use poor judgment on separating work time from play time,” says David Barron, labor and employment attorney at Cozen O’Connor.

In fact, some have already fallen victim to Pokémon Go’s appeal, losing their jobs over their excessive phone use.

Rafi Cohen, co-founder of Brooklyn-based online restaurant-ordering system Orders2me, attests to that. Two weeks ago he fired an employee for playing the game upward of 10 hours over three work days.

“It was really time-consuming and happened several times over the span of Monday to Tuesday, and Wednesday, when I ultimately fired her.”

Cohen says the worker seemed “a little surprised” to get the ax, but a precedent was set. “Employees got the message loud and clear,” he says. “Don’t [play] Pokémon Go at work, but also don’t play games or do anything that’s not productive to the tasks at hand.”

Legally, Barron says employees can be fired for playing games and that “Pokémon players are not a protected class.” However, if an employee is fired for that reason, it should be consistent with other disciplinary actions.

While creating specific Pokémon Go policies may be overkill, Barron suggests employers issue reminders about boundaries. “Now might be a good time to tighten up standards, generally, for personal use of smartphones and other personal activities in the workplace.”

Laura Kerekes, chief knowledge officer at ThinkHR, recommends relying on common sense even when policies are not in place. “Employers can reasonably assume that, outside of lunch and rest breaks and the occasional text or email for personal business, employees should be focused on work.”

Above all, consider your company culture, bearing in mind the signal an angry, company-wide e-mail can send to workers.

Barron quips: “No company wants to be the Pokémon police, and for most employees, that won’t be necessary.”

Read the entire article at: http://nypost.com/2016/07/23/new-yorkers-are-losing-their-jobs-over-pokemon-go/