By Ramon B. Nuez Jr. 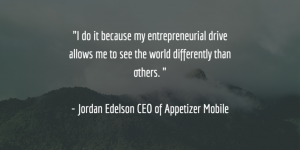 How do you feel about your leadership potential?

If you are like most leaders, you feel comfortable with your current level of leadership but understand there is room for improvement. The issue that I have found is Where do you start? That is especially true since a good leader is a complex responsibility.

That is the main reasons why I started studying leadership and interviewing CEOs.

What I have come to understand is that being a good leader is less about managing and more about taking ownership of your team’s success. How is this done – by owning everything in your world and making no excuses when your team fails.

Jordan Edelson has taken ownership. Since the age of 13 Edelson has focused on his intellectual growth. Jordan also established a standard of excellence which he expects others to own; which has allowed him to build Appetizer Mobile into one of the top 10 mobile app developers in the U.S.

So Jordan, what is your story?

I have been passionate about technology from a young age and have always had an interest in software, hardware/electronics and gaming. As an entrepreneur, I began my career at 13 teaching myself how to design and code websites.

At the time, I was also an avid video game player, playing in numerous competitions for prizes. I was inspired to create my own competitive video games and I self-taught myself how to create a MOD-based on the Half Life game engine. I ran and managed a team of modelers, animators, programmers, level designers, and sound engineers all during my middle school years.

We launched several titles over the course of several years. Soon after finding success in the game development world, I launched several properties in the video game broadcast arena. I pioneered video game streaming on both shout cast radio and online video streaming under the companies, Game Broadcasting Live and eSportsTV.

During my college years, I also took on a role as SVP of Sound Scope Music, a small record label based in NYC. Following that, I became the Chief Technology Officer of the first publicly trade hip-hop company, called H3 Enterprises. I was instrumental in helping launch several HipHopSodaShop concept restaurants and forging partnerships deals with both Microsoft and Viacom for the business.

I ended up leaving H3 Enterprises to start my own mobile digital agency, Appetizer Mobile LLC, in January 2009. From there I worked with celebrities, pro-athletes, major brands, and startups and built over 150 apps. Many of those apps have gone on either to be sold or have seen tremendous fame including some being featured in Apple TV ads.

In 2015, I had the honor of being named one of Forbes’ 30 Under 30. Under my leadership, Appetizer Mobile was named one of the Top 10 Mobile App Developer in the U.S. for 5 consecutive years.

How do you inspire innovation? How do you frame the challenge in terms so daunting that no one (yet) knows how to solve the problem?

I try to envision a future world I want to live, play, and do work in. I look for unique opportunities and ways to make meaningful connections to spur innovation. I also take time to observe the current world we live in and areas I have a passion for. I use this passion to think differently and push myself to challenge myself.

What is the WHY that differentiates the simple businesses from the purpose-driven business?

How do you get your new employees to buy into your “why?”

I try to rally new employees around a concept of a larger or more select purpose for what we do and why we do it. It’s not always easy to get an employee to buy into my “why,” and sometimes they never do, but I have found success laying out a path for them to follow to reach an understanding of how I got to my “why.”

I believe it is a combination of both. A leader’s primary goal must be to lay out the path to get to the results, define success for said results, and know how to drive people through creative/dynamic management to reach the results.