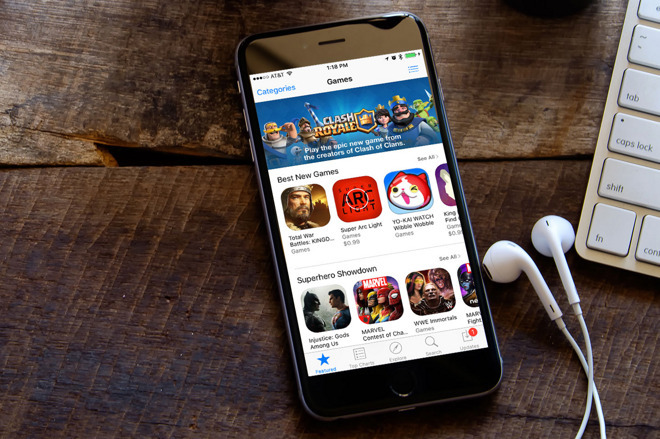 The store is the gatekeeper for apps, ensuring they meet Apple’s standards for quality and ethics. But over the years, it’s been challenging for apps to get noticed among the millions in the store, and some people find it too cumbersome to spend minutes searching for and downloading new ones, only to delete them later due to lack of space on their phones.

Venture capitalist Ernestine Fu aims to solve that problem. Her firm, Blackstorm Labs Inc. of Mountain View, sells technology that allows developers to distribute their apps without going through the App Store. Instead, the apps are available through links that consumers can send to their friends.

“The time is right for the App Store to be disrupted,” said Fu, Blackstorm’s co-founder.

Blackstorm Labs, which launched last year, has raised $33.5 million in funding. It is looking for alternative ways to distribute apps not just from the App store, but also from the Android equivalent, the Google Play store.

The numbers are huge. Consumers spent $3 billion in December at the App Store, and Apple takes in as much as 30 percent in app sales for those that are distributed through its App Store. The App Store generated nearly double the amount of worldwide revenue compared with the Google Play Store in 2015, according to a report by App Annie, an app analytics firm.

Blackstorm wants to get a cut of those sales, plus provide an avenue where developers can reach consumers faster because they don’t have to download an app. It plans to make money through its technology by either charging a licensing fee or a percentage of an app’s revenue.

Apple and Google did not return requests for comment.

Blackstorm in November released a game called EverWing on Facebook’s Messenger app, letting users challenge their friends by sending them an invitation. Users click on the invite within Messenger to play and don’t need to download the game through the App Store. EverWing was one of a handful of games allowed on Facebook’s platform and was noted by the company as being one of the best instant games in 2016. Blackstorm has a studio where it can create its own games, including EverWing.

Amitt Mahajan, a managing partner at Presence Capital, said he believes this type of technology “has a lot of promise,” especially when it comes to games. It makes sense for people to release games in the places where they are talking about them, such as a chat message.

Other companies are also preparing for a future beyond a store for apps. Chinese firm Tencent told media outlets this week that its popular messaging app WeChat has a new feature that allows people to search for programs and add them within WeChat without going through the App Store. Google last year discussed Android Instant Apps at its developer conference; these would allow consumers to click on links and pull the minimal amount of information they need from an app without having to download the whole thing.

“The app should be available instantly,” as quickly accessible as a Web page, said Raheel Hasan, CEO of 1App, a Menlo Park startup that plans to distribute apps through links.

1App charges developers a fee for using its service that lets them distribute apps outside of the App or Google Play stores. Users click on a link that allows them to stream apps instead of downloading them. Hasan declined to say how much the cost to developers was, but said it is a percentage based on app purchases or use and is generally less than what Apple and Google charges developers.

But some analysts caution that these new distribution efforts by apps raise other questions, such as how strict the startups will be when it comes to security. When apps go through an approval process through Google or Apple, the companies make sure the apps meet their quality standards and policies.

“I would be concerned about viruses, malware and adult content,” said Jordan Edelson, CEO at Appetizer Mobile, which develops mobile apps.

Both 1App and Blackstorm say they take security very seriously.

Hasan said 1App would approve apps that haven’t yet been sold at the Google Play or App stores by reputable developers. In a way, 1App could be a way for a developer to test an app in the market without having to go through a lengthy approval process.

“You have to change how people get to apps,” Hasan said.

Read the entire article at: http://www.sfchronicle.com/business/article/Move-over-App-Store-Startup-looks-for-new-way-10846057.php?t=952394b69d&cmpid=twitter-premium